Eradication and Control of Invasive Weeds

There are a number of different pernicious and invasive weeds that can be extremely difficult and disruptive for developers.  Weed species such as Horsetail (Marestail), Poison Hemlock, Ragwort, Giant Hogweed, and Japanese Knotweed on a development site can cause delays and increase costs.

Japanese Knotweed in particular, is highly destructive and has the potential to push through tarmac, grow through cracked concrete and invade the insides of houses.  Japanese Knotweed can grow up to 2cm per day. Its rhizome or underground root system can extend up to 7m from the parent plant. It is highly persistent and just a small section of the rhizome (0.7g) can be enough to grow a new plant, meaning that any disruption may risk multiplying and spreading the problem throughout your site.

A development site infested with Japanese Knotweed holds an inherent risk of the plant being disturbed and thus spreading. Japanese Knotweed is covered by the Wildlife and Countryside Act 1981, and the Environmental Protection Act 1990 – both deem it to be controlled waste.  The recent Anti-Social Behaviour, Crime and Policing Act 2014 makes it an offence to cause the plant to spread.

The problem is simple, and the solution is even simpler.  Japanese knotweed in most respects is just like any other weed, but it has a very waxy cuticle that sheds moisture, so it sheds herbicide which is why it’s reported to be so hard to eradicate.  For example, if you had a greasy plate in your sink, you would tackle it with washing up liquid – so with Japanese knotweed you can do the same; mix the herbicide with its counterpart wetting agent.  It then dies, like any other weed.  It is a deep-rooted plant so the delay in being able to certify its demise after the first hit is due to root elements that are not killed by the herbicide getting deep enough down into the roots.  If there is a lot of root remaining deep down, it might have enough energy to push out a shoot all the way to the surface. Therefore, it needs monitoring and spraying the following season.  The weed, however, will normally die after 2-3 sprays.

It is important to deal with the matter sooner rather than later.  James Blake Associates can offer an effective solution that is neither complex nor expensive.  Our expert team will provide a detailed report featuring:

Using DEFRA approved herbicides and wetting agents to cut through the plant’s waxy cuticle, successful eradication of Japanese Knotweed can be achieved remarkably quickly.  We offer the same guarantees as other companies, but for less cost. 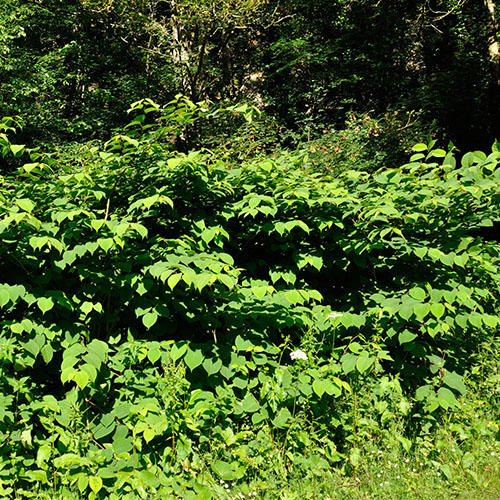